Louis Philippe This review is a part of our ‘Social Media Strategy Review’ series where we do a 360 degree analysis of a brand’s social media activity. You can read the reviews of more brands here.

Louis Philippe is a leading apparel brand, which caters to the need of a mass market as well as luxury merchandise. There is a mixed target audience in terms of age groups. The store has a collection of all occasion wear and accessories for men.

The brand is known for running various exciting campaigns on Social Media which are aligned to its core branding. Campaigns such as #KnotIn15 where users had to upload videos tying a knot under 15 seconds and #PlayStylist, where users were directed to an interactive online experience have kept the fans of the brand engaged. Jack in the Box Worldwide is the digital agency that handles the digital strategy of the brand.

In this article, I will review the social media strategy of the brand over the past 3 months to understand better the overall marketing activities initiated on various social platforms.

With over 612K fans on Facebook and 8K+ people talking about (PTAT) the brand, Louis Philippe is doing decently well on the platform. The brand has a growth rate of 13%. It was seen that the engagement has gone up considerably more than previous months’ in the month of November. This is because of the popular brand campaigns.

Louis Philippe has generated an engagement among over 1 lakh fans in the last 3 months. As a percentage, over 20% of the fans have been actively engaged by the brand.

The brand has a consistent level of engagement. Maximum engagement was generated in the week, 30th September to 6th October. Lately, after the massive campaign Louis Louis Philippe Dressing Room, the page has seen a fall in interactions.

Louis Philippe, on an average posts over 3 updates a day. The maximum interaction is seen in the case of photos while the least is in that of videos. 277 photo updates were made, 49 status updates, 6 video updates and 1 link update.

Louis Philippe uses its cover space creatively. The cover is changed when there is a new campaign being run or when the brand is participating at an event. When neither are applicable, the cover image is used to promote its products.

The brand is making good use of applications to showcase product launches, take feedback for its magazine, The Label, run contests and other features. It has a total of 8 applications and nearly 500 monthly active users.

Louis Philippe on an average makes 3-4 posts a day. The engagement of the brand is excellent since it receives upto 625 likes, 19 shares and 6 comments per post, on an average. The posts are a mix of product promotions, quotes, event promotions, shared images from The Label Magazine page and other general updates.

The brand also posted photos of Kapil Dev visiting the store in Bangalore. This is an interesting way of reinforcing brand image. This is the “social” side of social media where brands can directly tell their fans about fun social happenings at different stores.

While running the #PlayStylist Dressing Room campaign, there were a number of posts around actor Vidyut Jamwal who was the brand ambassador for the campaign. One such post shows the actor posing in various outfits and posing in the real dressing room. This got the users excited since they had only accessed the virtual game through the microsite. Posting real pictures was an interesting activity by the brand.

In terms of interaction, Louis Philippe responds to most posts and comments within 2 days. The brand interacts well with its fans and does not ignore comments unlike most brands. Commenting and replying to fan posts lead to building trust on social platforms.

Largely, the sentiment is positive. However, the brand can come up with more interesting ways of promoting their product on Facebook to increase engagement and the PTAT score.

Louis Philippe has over 1600 followers on the micro blogging platform. This is pretty low since the brand has recently adopted the site for its branding.

The content buckets are pretty much similar to that on Facebook. The brand receives 2-3 retweets and replies per tweet. However, it received more than 7K mentions in the past 3 months. The brand posts over 11 tweets per day.

The brand posted 261 replies and received 380 mentions in the last 3 months. The maximum type of engagement was through retweets.

The brand is running a contest #GatewayToExcellence to promote an event, where it is asking fans to reply to a certain set of questions.

The #PlayStylist campaign was run prior to this and received a superb response from users. Positive tweets have flowed into the platform.

In the month of August, Louis Philippe had run a contest through a Twitter Influencer to generate engagement and interaction. Getting an influencer to run a brand contest is a great way of driving interaction, especially if you are new to Twitter. The contest was called #HisWardrobeMisses and cash vouchers were given out.

Apart from this, the brand retweets a lot from other pages which is rare since not many brands retweet from other accounts. However, these tweets are related to fashion and style. 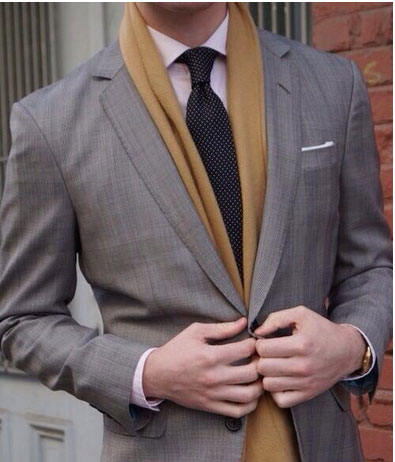 One good thing that LP does is it interacts heartily with its followers. Infact, it jumps into tweets which have not even mentioned the Twitter handle to begin conversations. This is the very essence of the platform and the brand has understood this very well.

The brand can definitely pump up the follower count by tweeting more and coming up with innovative Twitter-only campaigns. It can also follow the day-wise trend of engagement. Thursdays and Fridays have seen more tweets by the brand than the other days. However, it receives maximum mentions on Tuesdays.

The brand channel on Youtube is called House of Louis Philippe and is well maintained, given its recent entry into this platform. With a total of 160 subscribers and over 2 lakh views, the channel takes users behind the scenes of its collection shoots and integrates Facebook and Twitter campaigns with YouTube.

There are plenty of Behind the Scene Photoshoot of LP collections which are interesting to watch. A fan would love to know what goes behind his/her favourite brand’s modeling photographs.

Apart from this, the recent campaign that the brand executed had a microsite where users could create stylish looks for Vidyut Jamval the actor in a bid to win an exciting new wardrobe by the brand. The campaign was extended on Facebook and Twitter too. What I really find interesting is that it was given a perfect ending on Youtube by shooting a video with the actor where he announced the name of the winner. The video even has initiated users’ comments.

Currently, the channel has only 30 videos. Overtime with exciting videos like the one above and by integrating Youtube in fun campaigns can drive more views and increase the popularity of the channel.

Louis Phillipe is currently not present on Pinterest. Its recent footprints on Twitter and Youtube are showing positive interaction levels. The brand is taking its step towards successful campaigns like The Dressing Room and I am looking forward to seeing some brilliant initiatives. On Facebook, the numbers are growing too and a little more creative energy can do wonders for the brand. Give us your opinion of the brand and suggestions too through the comment section below.