The DJI Mini 2 builds on the success of the previous Mavic Mini, providing a much better video shoot quality, while retaining the straight out of the pocket flying capability. 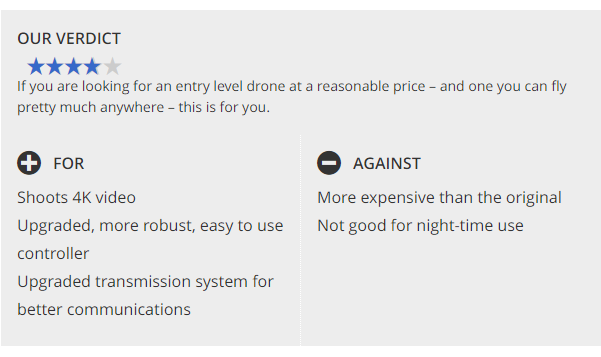 Released back in November 2020, the DJI Mini 2 looks remarkably similar to its predecessor, the Mavic Mini – but it packs a much bigger punch.

The headline change on the newer model is that the 1/2.3″ CMOS sensor can support 4K video, which is a significant improvement on the 2.7K offered by the older Mini. The transmission system has also been upgraded to Ocusync 2.0, a much more robust method of communication supporting both 2.4Ghz and 5.8Ghz. On top of this, the Mini 2 also boasts a vastly improved controller, that’s weightier and easier to use with a smartphone. More powerful motors have been fitted too, giving the drone a top speed of 36mph in sports mode.

With care, this model can be flown straight off the hand and landed in the same way, although prop guards would be advisable with this method. The key point here is that the Mini 2 is small enough to be taken anywhere and flown anywhere. It can even handle windy conditions, maintaining remarkable stability for such a lightweight drone.

It is an entry level model but with advanced features that are easy to access. If you’re new to the hobby, we’d recommend looking up the local drone regulations in your area before taking it out to fly – although at this weight, you won’t have to register with the FAA if you’re only using it for recreational purposes. You can also check out our round-up of drone photography tips, which will help you get the most out of your new toy. 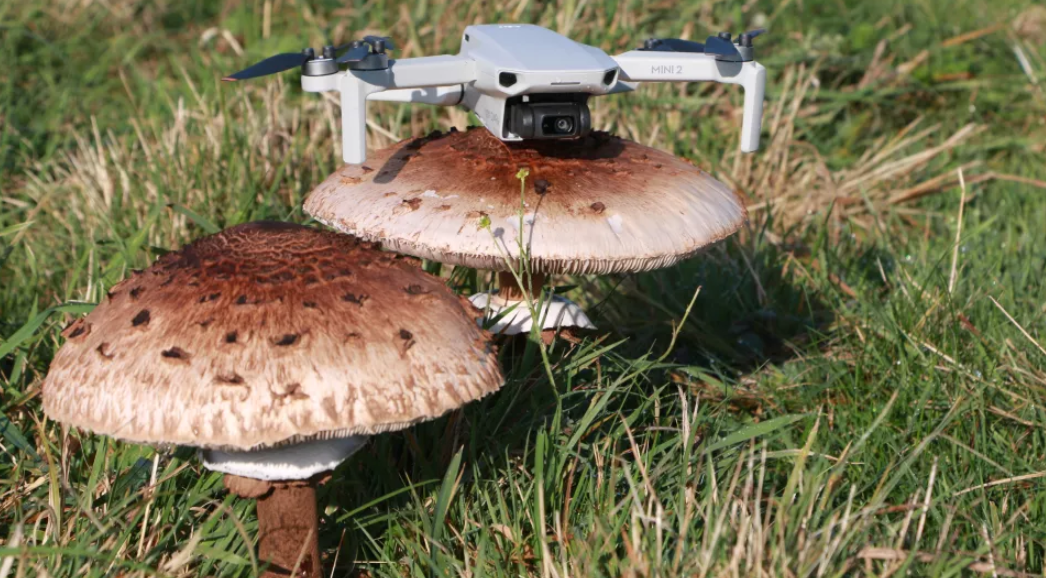 It’s hard to over-emphasize the improvement to the Mini 2 package made by the change in the controller. The original Mini sported a plastic, fold-out model that had a video game look and feel, but new the Mini 2 design has proper heft and is stronger in build. On the front face, aside from the toggles, an RTH/pause button sits with a switch for the three flight modes, and two small function buttons. It’s clean, like the drone itself, and lends confidence to the operator.

The drone, with its fold-out arms, is a replica of the Mavic Mini. On battery life, DJI reckons you can get 31 minutes out of this model; in practice, with a return to home auto function kicking in with 25% power left, you can really only allow for 23 minutes of flight time per battery. It’s a good reason to buy the Fly More Combo as you get three batteries with that package, allowing well over an hour total flight time. 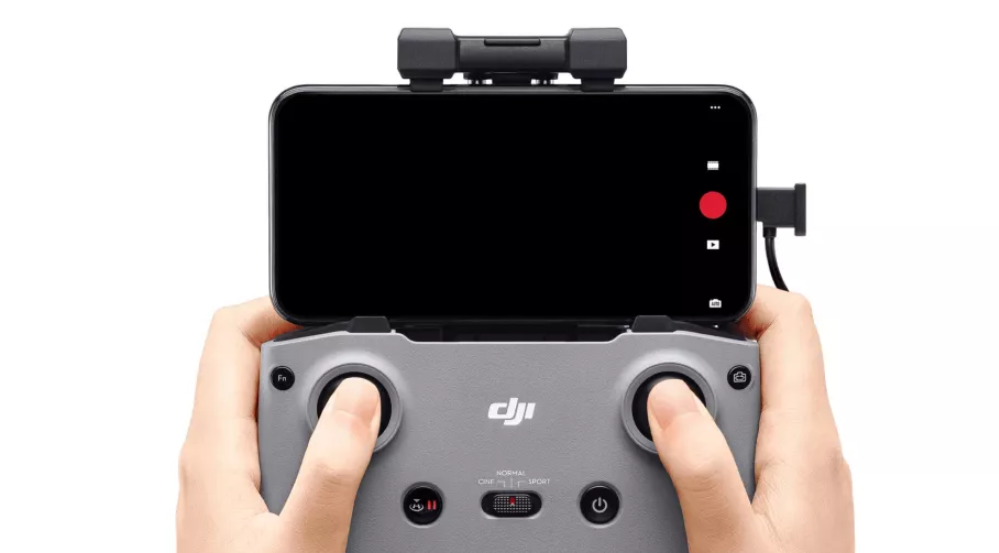 Talking about power, the controller, at 5,20000mAh, provides plenty of it, although it does take a while to recharge. One further point: the rear of the drone is where the SD card goes, so it is easy to access. There is also a USB-C port which can be used for on the hoof charging. And note that although the Mini 2 has no forward or backward obstacle avoidance sensors it does have a couple underneath so it will react to the ground when landing. 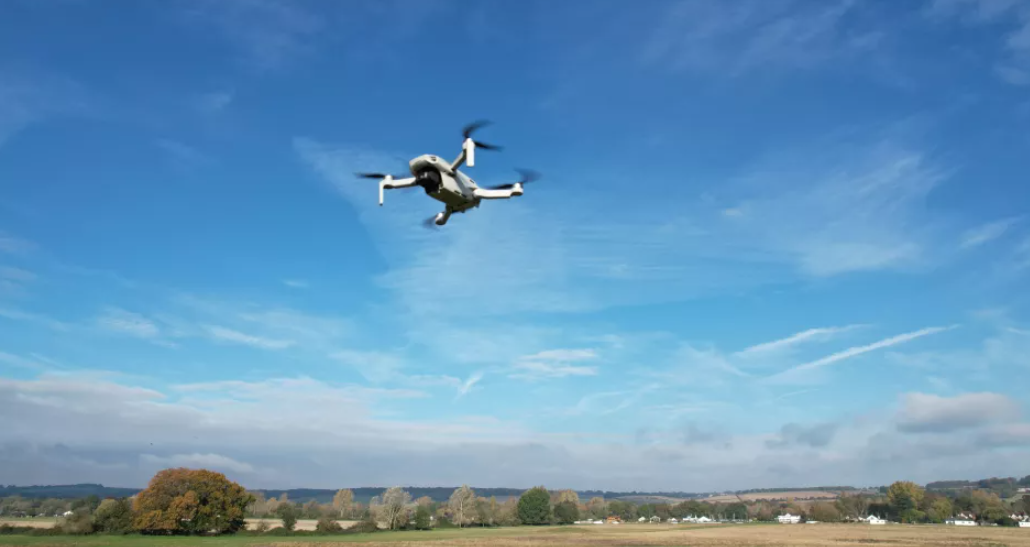 The drone’s much improved 4K video system is its main appeal, but there are other add-ons, like the Panorama camera function, providing an automatic sequence of stitched together images in 180 and 360 degrees, or in a wide format.

When shooting video, the results are extremely stable, including when the air is choppy. It will easily take up to Force 4 conditions and still deliver a stable set of images. Its ability to cope with fairly robust changes of direction or even sharp stops is also excellent.

Video shooting works fine in overcast conditions but the system also copes well if pointed towards the sun, handling flare sensitively. But, as you would expect from a small sensor, very overcast or dark conditions will result in a poor outcome. It does have a tendency to underexpose, so pick good flying days with sunshine for the best results.

The controller is easy to understand and offers additional function buttons to enable a quick response. The toggles allow for smooth pans, even in Sports mode – once you have got used to the controls. The output display designed to help the operator and provides sufficient, but not too much, real time information. On screen tutorials are an added bonus. 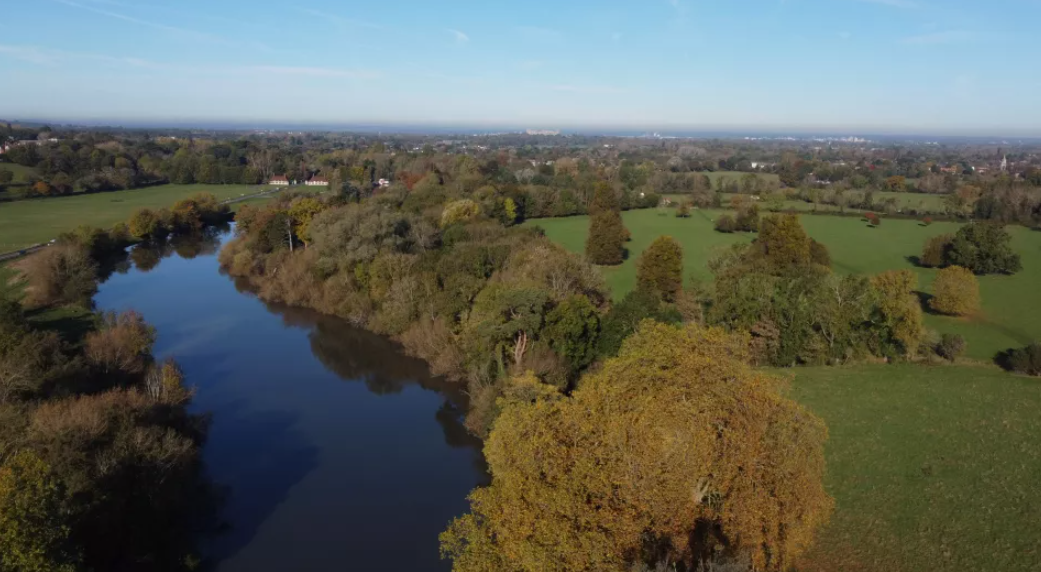 The Mini 2 is as easy to fly as it gets. You can use it straight out of the box, with simple instructions for the beginner, and plenty of on screen tutorials to help guide all users. But do take care with the model. As it weighs so little, the build is lightweight and delicate.

The drone comes with a very useful strap, which holds the propellers in place when the drone is back in its case. Once the drone is in the air, it is stable in flight in robust wind conditions (DJI say up to Force 4). It performs extremely well, in all three flight modes.

For the best video results the Cine mode allows for smooth pans and closing in and reversing shots. Digital zooming is possible in 4K in good lighting conditions. The controls are responsive (in some respects overly: it’s light on toggle controls).

New users will not need to go beyond the main display, but there are plenty of places to explore through the display screen, in terms of video and stills shooting, once you have become familiar with the basic system on offer.

The main controller has an auto take off and landing button, a quick shutter release control on the front right, with a rolling control on the left to allow for gimbal movement, up and down. When you get comfortable with the Mavic Mini 2, it may taken off from the hand – very careful. Maybe use protective gloves if you try this – and landed in the same way. Because of this, allied with its size, it can flown from just about anywhere, on a mountainside, from a ski slope, by the ocean, wherever you like. It’s absolutely ideal as your video and photography traveling companion, enabling you to shoot fabulous video or killer stills, wherever you are in the world.

The Mini 2 on its own is $449, which we think is very reasonable. For comparison, the original Mavic Mini costs $399, but that model can’t capture 4K video. Newer models from the company, like the DJI Air 2S, tend to cost a little more, ranging from $999 to over $2000.

It’s worth looking into buying the Fly More Combo, which priced at $599. In addition to the Mavic Mini 2, you’ll also get two extra batteries, a two-way charging hub and a 360-degree propeller guard.

If you want a compact, easy to carry, easy to fly drone with 4K video capture, this is currently the best available. It’s great for the novice, and its size and weight mean it never feels intrusive in a small rucksack; equally so when flown outdoors. That $560 is very reasonable for a drone with all these features, too.

IF THIS PRODUCT ISN’T FOR YOU

If you already have a Mini and the improved video system is not something you want, then the price may be off-putting. It’s also not going to work for you if night flying is your thing.

If you want to try something different, Autel Robotics is in the process of launching the Nano, priced at $1060. It has a three-way obstacle avoidance system along with 4K video and a 50mp camera, all weighing just under the magic 8.8 ounces (250 gms).

If flying isn’t your thing, but you want to take high quality aerial shots, try the Skydio 2 ($949 starter kit), a fully autonomous system with a lot of panache built in.

In 2022, DJI released its first travel-friendly and lightweight drone, the DJI Mavic Mini that